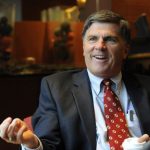 I awakened last Thursday to good news: Justice had finally been afforded to Gen. Michael Flynn.

Finally, I thought, enough of the facts had been brought to light that even haters would surely see how poorly the 33-year veteran, three-star general had been treated.

I hoped that even the administration’s considerable number of detractors could see that the blemish of Flynn’s less than forthcoming discussions with Vice President Pence and non-material and FBI-encouraged false statements did not justify the FBI’s plan to destroy him.

And then reality hit me square in the face: Apologists for the Obama Justice Department would never let this matter go.

The setting here is the James Comey-generated entrapment of an incoming national security advisor. We now know it was a setup because the FBI possessed the transcripts of Gen. Flynn’s (wholly appropriate) conversations with Russian Ambassador Sergey Kislyak and that Comey had previously bragged about his perjury trap on tape — going so far as to say he would never have entertained such a plan when operating under a Bush or Obama White House.

Last week, we found out that FBI agents Peter Strzok and Joe Pientka proceeded to interview Flynn in an attempt to — per the notes of agent Bill Priestap — gain “[t]ruth/Admission or to get him to lie, so we can prosecute him or get him fired.”

The public was previously informed that despite this general (and plainly illegal) motive, the interviewing agents concluded that Flynn did not lie to them. Recall this conclusion was reached despite their successful ploy to discourage Flynn from bringing an attorney with him.

Most of all, we are now beginning to learn the rest of the story because a lioness of an attorney named Sidney Powell called out all the culpable miscreants of the Obama era in her successful representation of a man who could not afford to pay her. The government, completely abandoning the professional disinterest that is supposed to be their hallmark, had made sure that Michael Flynn was broken in more ways than one.

The most distressing single government act that has recently come to light is the extensive editing of the so-called “FP-302” report (raw interview notes) by Peter Strzok. Indeed, last week’s texts show that Strzok edited Pientka’s report to such an extent that he told FBI attorney Lisa Page that he was “trying not to completely re-write it.” Even worse, the texts reflect that Page contributed edits as well — despite not being present at the interview.

Back to my naïve reaction. In retrospect, it was silly of me to think that those on the other side of the partisan divide would for a split second issue a mea culpa for attempting to destroy the reputation of an American patriot.

Indeed, the dagger to my unfulfilled hope was supplied by none other than the person under whom all the shenanigans took place. Yes, the former law professor Barack Obama, who said in reaction to the DOJ’s decision to drop the case:

“The fact that there is no precedent that anybody can find for someone who has been charged with perjury just getting off scot-free. That’s the kind of stuff where you begin to get worried that basic — not just institutional norms — but our basic understanding of rule of law is at risk.”

Note that the former president did not even get the alleged crime right: Flynn was charged with making “false statements” to the FBI, not perjury.

Left unsaid by most of the outraged left-wing partisans on the cable news networks is an inconvenient legal requirement. To wit: The Department of Justice is compelled to drop prosecutions once it concludes it has little or no chance to prove guilt beyond a reasonable doubt. Here, the accumulating evidence made for a damning case of government entrapment.

The rightful decision to drop the case does not alter the ugly chain of events that placed Flynn in the government’s crosshairs. He had the bad timing to join a campaign and incoming administration during Justice Department investigations. He was made a target because he was part of the team that was not supposed to win the election. He subsequently resigned his position in disgrace and then pleaded guilty because prosecutors threatened to put his son in prison. His defense costs broke him. He lost his home.

In this case, it should not matter whether you bleed blue or red, whether you see Mike Flynn as a flawed man who was not straight with the vice president or as an American hero. It matters because if such a nightmare can be foisted upon a three-star general, imagine what could happen to you.

“Not in America,” all good Democrats and Republicans should say in unison. Every one of us deserves better — and each one of us must demand as much going forward.