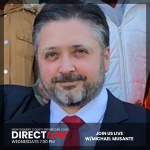 Michael is the President of Musante Strategies, LLC, a government relations firm operating in the District of Columbia since 2005. Michael develops and implements strategies in the areas of government relations and legislative outreach at the federal, state, and local levels. Michael has advanced legislative initiatives for multiple clients in the non-profit and private sector focusing primarily on education and education reform efforts. Prior to founding Musante Strategies, Michael served in a variety of roles for non-profits, private companies and a government agency including The Center for Education Reform (CER); Koch Industries; The Charles Koch Foundation; and the US Department of Health and Human Services (HHS).

He earned a Bachelor of Arts degree in political science and a Master of Public Administration from The George Washington University in Washington, DC. As a long-time resident, Michael has found opportunities to contribute locally to the District. Currently, Michael chairs two Mayoral appointed Commissions in the District of Columbia dealing with public charter school financing and public school student mental health initiatives. He has also served as an elected official in the District of Columbia by serving a two-year term as a local advisory neighborhood commissioner in the Capitol Hill neighborhood of Ward 6.

He currently resides in Washington, DC with his wife, Ramola and two their two children, Simryn and Kian.