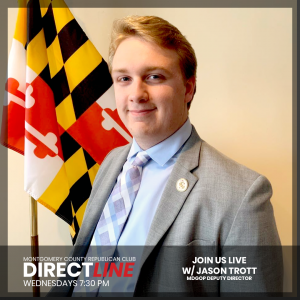 Jason Trott, Deputy Director, Maryland Republican Party joins us.  Jason will tell us all the cool and exciting things happening at the State Party.

Jason Trott previously worked in the office of Delegate Seth Howard, on Capitol Hill, and in the Anne Arundel County Government.

Additionally, Jason has volunteered on numerous Republican state and local campaigns in Anne Arundel County. He currently studies Government and Politics at the University of Maryland, College Park. During the summer, in his spare time, you can find Jason cruising the beach in his Jeep.