Candidate for US Congress Maryland - 2 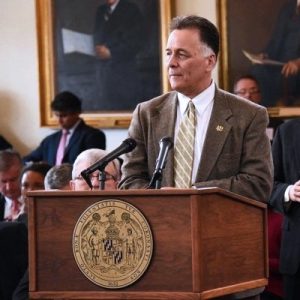 Johnny Salling is a lifelong resident of Baltimore County. Growing up in a working-class home, he quickly learned the value of honesty and hard work. After graduating from Sparrows Point High School in Dundalk, Johnny joined the United States Army and served as a Combat Engineer. That commitment to service to our country is shared by Johnny’s family as well, as two of his children are actively serving in the U.S. Army.

Speaking-edited after serving in the military, Johnny worked at the Bethlehem Steel Mill for 30 years at the Sparrows Point location. During his time there, Johnny was an active member of the United Steelworkers of American Union until the plant was closed down by the last operator, RG Steel.

In 2014, Johnny was elected to the Maryland State Senate for the 6th District representing the citizens of Dundalk, Essex, and Rosedale in Annapolis. As a member of the Senate, Johnny has served on the Education, Health and Environmental Affairs Committee. He has also served on the Joint Committee on Fair Practices and State Personnel Oversight. He’s a member of the Waterman’s Caucus and the Maryland Military Installation Caucus.

Learn more about the Campaign at www.SallingforCongress.com