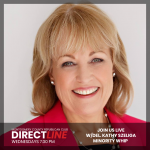 Kathy Szeliga currently serves the people of the 7th District which includes both Baltimore & Harford Counties. Kathy has been the Minority Whip since 2013.

This week's guest Maryland Delegate Kathy Szeliga was first elected in 2010 to the Maryland House of Delegates. Kathy serves on the Health and Government Operations Committee. She has served on the Appropriations Committee and Environment and Transportation Committee.

In 2016, Kathy Szeliga successfully triumphed over a crowded field of 14 candidates to be the Republican nominee for US Senate. Although unsuccessful in the general election, Szeliga won 18 of 23 counties and received almost 1 million votes and the second highest votes for a Republican in the history of the state. In Kathy's senatorial bid, she outperformed the presidential candidate statewide, the first time a senate candidate received more votes than the presidential candidate in recent history.

Delegates Szeliga and Kipke organized a highly effective campaign effort in 2014 and successfully helped elect the largest number of GOP representatives to the Maryland House of Delegates in the history of the state.

Additionally, Delegate Szeliga has received prestigious awards, such as Maryland's Top 100 Women, The Baltimore Sun's Women to Watch, 2014 Legislator of the Year from MD Society of Anesthesiologists and a Towson University Distinguished Alumni Awardee in 2017.

Married for over 38 years to Mark, they have two married sons and two granddaughters. She has been an active member of Grace Community Church in Kingsville, Maryland, for more than 25 years. Kathy and her husband, Mark, started a construction general contracting business 32 years ago where they work together today.

Kathy Szeliga has dedicated her life to her family, their family business, and the citizens of Maryland. Her diverse background helps to make Kathy an effective Maryland State Delegate, a leader in the House of Delegates, and the highest-ranking Republican woman in Maryland.