Over the past few days, we have come to learn that the New York Post, founded by Alexander Hamilton, has been censored by liberal media outlets yet again.  We are living in the age of Tech Censorship.  Big tech is preventing people from sharing the New York Post article titled, “Smoking-gun email reveals how Hunter Biden introduced Ukrainian businessman to VP dad” via Twitter or Facebook.  Twitter has suspended the NY Post Twitter account, as well as others whom are sharing the NY Post Article.  This is clearly being done to help out the fledgling Biden-Harris presidential campaign.

Twitter has stated something along the lines how this is because they don’t allow hacked information to be used on twitter.  Oh, really?  They had no problem when leftists used Twitter to leak the proven fake “Steele dossier” or the leaked private phone conversation of the First Lady.   If this sounds like they are changing the rules in the middle of the game, well, that is exactly what they are doing.

YouTube Channel MidWestly, ( https://youtu.be/Rspc22AFFgU ), who originally posted this story on 10/13/2020 and commented in future posts, while YouTube (Google) is making it harder for people to find his vlog on the story.  MidWestly has posted several follow-ups on the story, and I highly recommend you go watch their reporting.

This is very troubling when a handful of social media companies start on a campaign to block content that they personally disagree with.  It would be fine if they were “media outlets”; however, they aren’t “media” which they have themselves stated several times, they have stated, "...we aren't content creators..."  I know they go back and forth depending on what benefits their views the most.  Their allies in big media have gone along with this coverup of emails between Hunter Biden and his father Joe.

Last night (October 14, 2020) the Montgomery County Republican Club tweeted out the article without any problems; however, it was gone when I tried looking for it this morning.  So, I tried to repost the same link this morning, with the result of “Something went wrong…”.  Screenshot posted below: 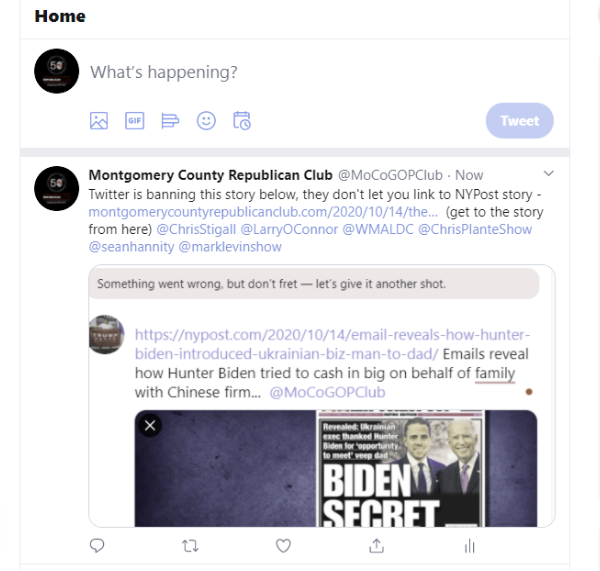 I thought to myself, “perhaps something was wrong, let me try with my personal twitter handle”. Guess what ladies and gentlemen - I got the same result! 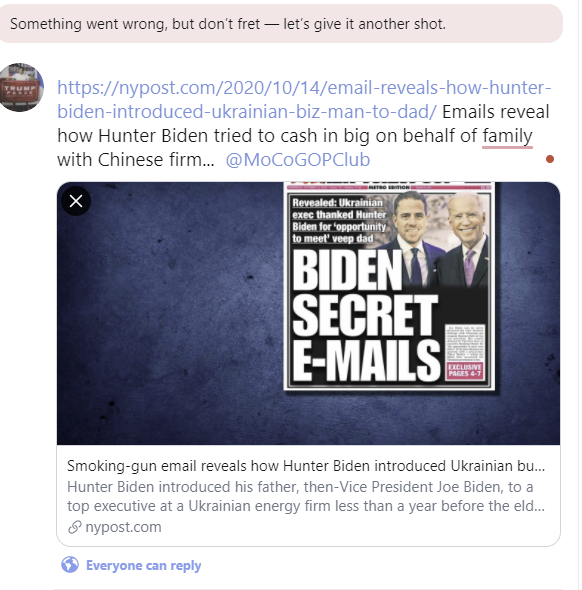 So then I decided to try the link for the New York Post article from the Montgomery County Republican Club page.  I “Liked” the article on our page and “…Surprise, Surprise, surprise…”, as Gomer Pyle would say, it went through!

Now, hopefully, this stays up.  And just for fun, I did the same thing from my personal Twitter handle @DwightNation. I copied in the time stamp so we will have a record if they pull down our tweet again.

The leftist media is doing their best to put a lid on this story by spreading a major disinformation campaign within every leftist media outlet from the Hill to the overrated CNN, MSNBC and other fake news outlets.

The media has a history of ignoring their rules. Back in 1995, they had no problem with the illegal recording of private phone conversations between Rep. John Boehner and then Speaker Newt Gingrich.   However, a few years later, they made a federal case about the Linda Tripp/Monica Lewinsky saga.  The Howard County Prosecutor went out of his way to prosecute Linda Tripp on wire tapping, (note: she had gotten immunity for the wiretap), but a liberal Democrat Prosecutor won’t let little things like that get in his way when he is on a mission for his Democrat bosses.