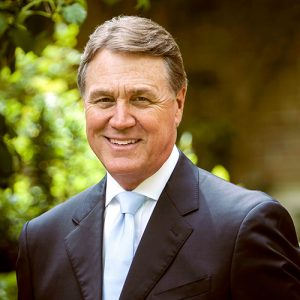 David Perdue is the senior United States Senator from Georgia and a proven business leader with more than 40 years of real-world business experience leading some of America’s most recognizable companies.

David was born in Macon, Georgia and raised in nearby Warner Robins. As the son of two public school teachers growing up in the 1960’s, David learned the importance of education, hard work, and equality at a young age. His father became the superintendent of the Houston County school system and was one of the first superintendents in Georgia to integrate the school system.

Following high school, David enrolled at Georgia Tech where he earned a degree in Industrial Engineering and paid his way through by working warehouse and construction jobs. After graduating, he married Bonnie, whom he had met in the first grade and they have been married for over 40 years.

I highly encourage my fellow Maryland Republicans to donate to Sen. Purdue's campaign or if you have time go down to Georgia help with the run-off election on January 5, 2020.