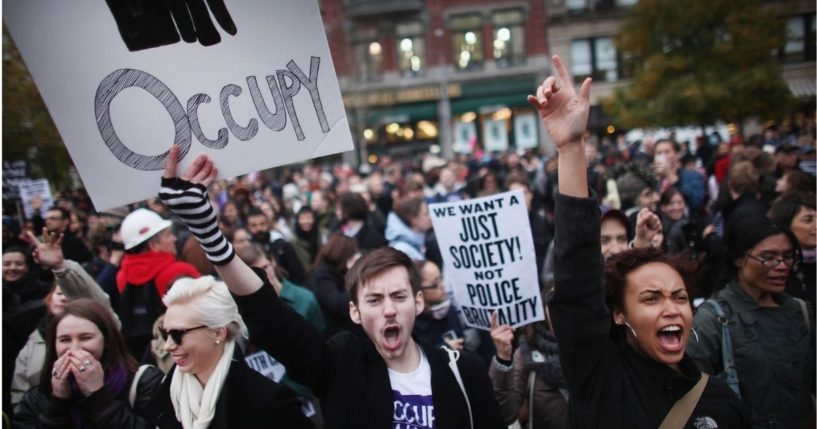 Progressive Democrats have made no secret of their intent to transform a “racist” America.

That these woke activists seek to do so by devaluing American culture issue by issue, step by step is quite clear. Think about it:

The establishment of filthy tent city encampments around the centerpiece of American capitalism was short-lived. Yet what most of us saw as a rather pitiful attempt to devalue (embarrass) American commerce gave rise to today’s woke socialists.

It also marked the escalation of an intimidation campaign against big business that has enjoyed considerable success. As a result, a large component of corporate America willingly falls for any lefty cause that comes down the pike.

Interestingly, long gone are the days when the Hillary Clintons of the world would fire up campaign crowds by demonizing big businesses’ win in Citizens United. In this case, the “enemy” simply folded its hand.

This beauty was an attempt to devalue law and order by taking money and therefore personnel away from the very people tasked with defending us. Clearly ludicrous from the jump, it nevertheless had considerable impact on the rhetoric and voting behavior of many Democrats over the past 18 months.

But all terrible ideas must come to an end. This one has lost steam as so many of America’s most beautiful cities (Seattle, San Francisco, Portland, Chicago) have descended into chaos.

What better way to denigrate and ruin a country than to devalue the people who protect its national borders? Recall the widely reported allegation that Border Patrol agents on horseback had whipped illegal migrants. Open borders advocates (and their sponsors in Congress) took full political advantage, until video evidence revealed the allegations to be patently false.

As usual, no apologies were forthcoming. Still, a nonstop campaign to emasculate our Border Patrol continues unabated.

No pandemic-era mission was more important to the new left than the (generally successful) campaign to close churches, synagogues and mosques… while keeping liquor stores open.

Here, a secularized left was able to devalue religious observance by reducing religious practice to just another mundane activity subject to government control. You might rightly interpret these events as yet another chapter in the left’s relentless campaign to degrade religious freedom.

CONGRESS AND THE COURTS

The most direct way to devalue American institutions is to change the rules that govern them.

Hence, the public is force-fed demands to eliminate the Electoral College (whenever Democrats lose presidential races) or do away with the Senate filibuster (only a racist tactic when employed by Republicans) or pack the Supreme Court (again, whenever Democrats are on the losing end of a 5-4 or 6-3 court decision). All in all, a transparently unsuccessful tactic to date.

One way to devalue dissent within civil society is unhinged disobedience whenever things don’t go your way.

The progressive media may rationalize such actions as “mostly peaceful,” but the vast majority of Americans recognize riots, looting, fires and the wholesale destruction of property for what they are. Note that intimidation tactics utilized against public officials (which are by definition illegal) count here as well.

SPEECH AND DISSENT: PART I

The relatively recent campaign to debase speech through Big Tech/big government control took a massive hit with the revelation that Hunter Biden’s infamous laptop is not Russian disinformation but indeed real. This was followed by a second significant hit when news broke of a quietly assembled group (the “Disinformation Bureau”) within an agency (the Department of Homeland Security) that has utterly failed to perform its central mission of protecting the border.

But do not miss the central point: Both moves constitute direct attempts to devalue First Amendment rights.

The proliferation of speech codes, trigger warnings and safe spaces across the college landscape is an unfortunate matter of fact.

But these invented constructs are no accident. The indoctrination of young people into devaluing their own liberty had to start somewhere. And what better place than our genuinely woke and uber-expensive echo chambers, better known as American colleges and universities?

An unforeseen but beneficial byproduct of pandemic-related education shutdowns has been the outing of inappropriate progressive material in our high schools, middle schools and even elementary schools. As a result, the campaign to devalue parental rights in the classroom began to take on water in Virginia last fall. It took on a lot more water in Texas just last week.

Fortunately, it appears that no amount of backtracking or cover-ups or cries of racism will cool off a parent power movement growing from coast to coast.

Concluding thought: All manmade things are a work in progress, and America is no exception. But deliberate attempts to devalue our basic institutions are a path toward mediocrity, and worse.