In his press conference on Jan. 19, U.S. President Joe Biden ran up the white flag on an impending Russian invasion of Ukraine. Up to this point, U.S. policy had been to deter that invasion and stand by an emerging democracy under duress in Eastern Europe. Biden revealed his expectations: Answering a question on Russian President Vladimir Putin’s mindset, Biden said, “He has to do something,” thus conceding his acceptance of an attack and only economic sanctions as the U.S. response. 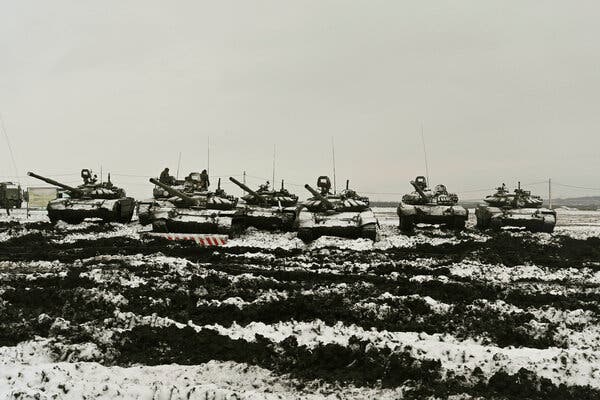 White House press secretary Jen Psaki quickly tried to cover up the revelation of Biden’s inner thinking of America’s stance in this time of crisis. But it was too late. Putin heard the press conference. The limited threat of sanctions is practically an invitation for Putin to invade Ukraine, a country that wants nothing more than to be a friend of the United States and a part of the West.

It’s not as though this crisis has come up suddenly. Russia invaded Ukraine once before, in 2014, leaving behind proxy forces in eastern Ukraine. It annexed Crimea, a recognized territory of Ukraine, which is now being used as a military staging area against its own country. All of this followed Russia’s 2008 invasion of Georgia and occupation of Abkhazia and South Ossetia and its staging of soldiers in the Transnistria region of Moldova against the wishes of that country’s government.

Putin has alleged that NATO is getting too close to Russia. He wants Biden to agree not to allow Ukraine to become a part of the Western alliance. He also demands that NATO withdraw its forces from the group’s sovereign members in Eastern Europe. In short, Putin effectively demands that NATO become a shadow alliance.

The truth is that this crisis has nothing to do with the safety and security of Russia. That is a bogus message intended for the Russian people and for Americans who will swallow it. An invasion would be the next decisive step in achieving Putin’s strategic goal: the reassembly of the old Soviet bloc. Putin said in 2005 that the collapse of the Soviet Union was the “greatest geopolitical catastrophe” of the 20th century. The essential step to reverse history is the subjugation of Ukraine. This is no mystery. Putin has repeatedly stated Ukrainians and Russians are “one people” and has reportedly cast doubt on whether Ukraine is a real state.

In May 2021, I visited Ukraine as part of a delegation with the American Foreign Policy Council. We met with almost every cabinet official. We joined with the Ukrainian Navy on the Sea of Azov. We went out onto the Donbass battlefield, where Russian snipers are shooting at Ukrainian soldiers. My observation: Ukraine has not given up on itself. Every government official and every soldier and every citizen of Ukraine I spoke with made it clear that if attacked, they would fight.

Despite Ukrainian resolve, Putin may attack anyway. He may feel that this is the “now or never” moment to meet his strategic goals. The citizens of the old Soviet empire are restive. Popular rebellions have created emerging democracies in Georgia and Ukraine. Citizens have gathered in the streets of Belarus and Kazakhstan and in Russia itself.

As U.S. ambassador to the Organization for Security and Cooperation in Europe (OSCE) from 2019 to 2021 in Vienna, Austria, I came to understand the geopolitical situation in Europe. The newly freed countries of Latvia, Lithuania, Estonia, Romania, Hungary, Poland, Georgia, Slovakia, the Czech Republic, and every other country of the former Soviet empire do not want to be subject to Russian power. The United States’ alliance with the United Kingdom, France, Germany, and others is strong, but they must know that America stands with them in a time of crisis.

There’s lots of history at the Security Council, but few changes.

An attack on Ukraine is an assault on a U.S. ally-and all of America’s other allies. This point is not lost on the countries in Eastern Europe that are placing their faith in U.S. power and resolve. The same message also applies to the Pacific. Why should Japan, Taiwan, Australia, the Philippines, Vietnam, and others stand with the United States when China is resolved to dominate their region?

When I was ambassador to the OSCE, it was clear to me that many countries in Europe were on the United States’ side in a conflict everyone knew was underway. Sweden and Finland, traditionally neutral, now understand that they are in danger of “Finlandization.” It’s time for the United States to aggressively recruit those two countries to become a part of NATO.

As we watch Russia’s fascist aggression, we should be clear that the struggle for the future begins right now. Severe sanctions should continue to be a part of the response. The sanctions should be imposed as powerfully as possible if the first Russian soldier crosses the Ukrainian frontier. U.S. intelligence has warned that Russia already has agents in Ukraine planning a “false flag” attack as a pretext for an invasion. The Ukrainians likely know who they are. They should be apprehended, and then the sanctions should be redoubled.

But sanctions alone will not deter Russia from invading. Sanctions imposed after the Crimea occupation haven’t fazed the Kremlin from its aggressive behavior. Besides, sanctions imposed by former President Donald Trump on the Russian-backed Nord Stream 2 pipeline were summarily dismissed by Biden, communicating that U.S. sanctions, in the end, are only temporary. The sanctions must be real, biting, and permanent-but we also need to confront the possibility that troops may need to be mobilized.

Russia should become a pariah among civilized nations. An effort should be made to expel Russia from all international organizations, starting with the OSCE. The OSCE stands for the principles of the Helsinki Accords, including that no country will attack another across recognized borders. If the OSCE countries won’t expel Russia and its satellite of Belarus, then the organization can continue as a shell for a better day, but the United States should not fund it.

We need to tell the truth to the Russian people. Putin’s government-controlled media are telling the Russian people they are victims of NATO threats. This is a lie, but it is intended to prevent the Russian people from objecting to the role they are being forced into as aggressors against their neighbors. We also need to start communicating with the American people the importance of unity, instead of the constant message of division that weakens our ability to protect ourselves. The time for strength is now.

James S. Gilmore III was U.S. ambassador to the Organization for Security and Cooperation in Europe from 2019 to 2021. He was the 68th governor of Virginia. Twitter: @gov_gilmore