Activists complain that intensive farming – and its climate impact – was ignored at COP26. 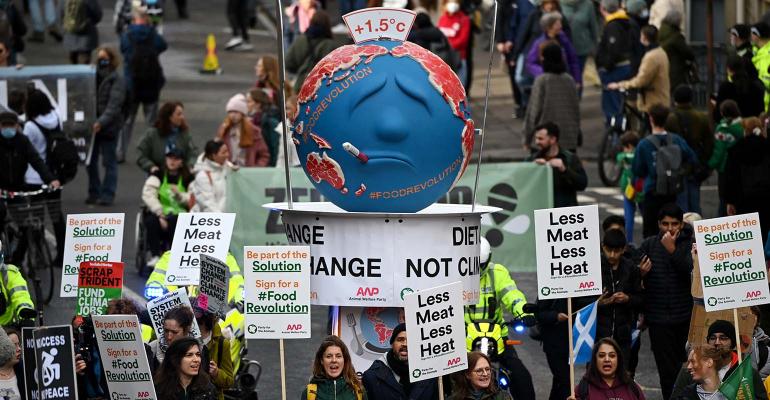 No one, not even President Biden, talked about agriculture or farming at the Glasgow United Nations Climate Conference, or COP26, the last 2 weeks.

I searched in vain for our agricultural publications to talk about how animal agriculture and crop agriculture were going to solve the climate crisis that some say does not exist. (You might want to read the book Unsettled by Steven Koonin, an Obama advisor at his Department of Energy.)

Agriculture has been accused of generating about 20% of global climate change emissions. I had to turn to The Guardian newspaper on Nov. 9, 2021, for a summary about agriculture at COP26 in Glasgow. The Guardian, an English newspaper, says “Sustainable food systems are a cornerstone to cutting emission but have been largely absent from the agenda in Glasgow.” In fact, the article leads off by saying, “The cow in the room is being ignored at this COP. Animal agriculture has been taken off the agenda….”

Apparently, there was a huge march in Glasgow that demanded action for a new sustainable food system. According to The Guardian, “Many industry representatives and campaigners feel not enough attention has been paid to food and farming at COP26, despite it being one of the keys to cutting emissions…”

According to The Guardian, the conference canteen’s menu included several meats or dairy items, which upset a lot of folks in attendance. Agriculture and farming were not allotted their own days at COP26, but finance, energy, and transport had specified days for discussion. The United Kingdom had four representatives from its farming unions attending COP26, and they all said “…they should reduce livestock numbers in their respective countries, or that people need to reduce their meat consumption.”

The U.S. weighs in

Our Secretary of Agriculture Vilsack stated “…I believe Americans can carry on eating the same amount of meat while keeping the world within safe limits on global heating.” (Apparently Secretary Vilsack has not read the book Unsettled.) Our Secretary of Agriculture also unveiled the fact that an extra $4 billion for agricultural innovation aimed at reducing emissions will be spent on U.S. farming techniques that mitigate ag’s carbon footprint.

One ecologist, Tom Wakeford, said that “such a form of agriculture is a dangerous fantasy…” I assume he was talking about intensive farming as we know it.

Many of the opponents to traditional agriculture want to stop intensive meat farming and intensive agriculture as it is practiced in the United States. In fact, one British farmer said “It’s outrageous that so little time at COP26 has been devoted to agroecological farmers. The programme is very weak. If they are promoting nature, we must talk about farming. Agroecological farming can nurture biodiversity, sequester carbon and regenerate the planet by looking after our soil, creating habitat and planting trees.”

There was a great deal of discussion on nature and government subsidies. During nature day, A UN report stated “…that almost 90% of the $540 billion of global agricultural subsidies given to farms destroy nature and fuel the climate crisis.”

There are a lot of people who believe commercial farming is dangerous for the climate, and that it must be stopped someway or somehow. I suspect that these people who attended COP26 have not gone hungry a day in their lives. Maybe it is time they had all food taken away from them, and they would stop their activism on behalf of a future without farmers or agriculture.