Average Americans May Not Wear MAGA Hats, But It’s Clear How They’ll Vote

On paper, it’s not a fair fight. 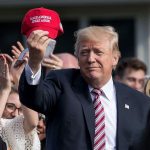 Together, this may be the most formidable political coalition ever assembled. Within its control is just about every means of communication available to the American voter — with unlimited resources to boot.

And they are not bashful about shameless selective speech shutdowns in order to fulfill their one and only goal: removing President Donald J. Trump from office.

Alas, much of the heartland feels especially aggrieved. Its people have been forced on the defensive.

One’s freedom to wear a MAGA hat in a public place or place a Trump bumper sticker on their vehicle is encroached upon. Indeed, 77 percent of Republicans (according to a recent CATO poll) feel uncomfortable expressing their opinions in the public arena.

They see the angry mobs on the nightly news. They fear for their property and personal safety. They see the lengths to which self-appointed arbiters of conformity are willing to go in order to end the Trump experiment in disruption and American nationalism.

Such chaos is antithetical to all that is good and great and sacred about America.

The proposed revolutionary reimagining of America’s most basic values is not a transformation they will support or accept. And so a large contingent of red voters in the heartland are seething.

They hate the rioting and looting and weak-kneed responses from so many politicians. They have tuned out the NBA and will ratchet back their interest in the kneeling NFL. They resent celebrities preaching and dictating to them during 60-second commercials sponsored by suddenly woke big businesses.

Perhaps the ultimate insult has been to watch some commentators preach the importance of social distancing and mask-wearing and school closures for the average family — but bless the lack of these same protections at “mostly peaceful protests” that have destroyed so many of our major Democrat-controlled cities.

It is called hypocrisy — and Joe and Jane Average Citizen have had their fill of it.

Last week I appeared on a Sinclair Broadcasting panel in which a Democratic panelist sought to minimize Sen. Tim Scott’s widely-acclaimed “cotton to Congress” speech at the Republican National Convention.

Of course, such a dismissal is much more than inaccurate; it is insulting to African-Americans who refuse to indulge victimhood and dependency, to those who have overcome life’s obstacles and now enjoy the American dream.

But it’s all the progressives can bring to the table. There are only two ways they treat black people: It’s either condescension or you do not exist. Per Joe Biden, “If you have a problem figuring out whether you’re for me or Trump, then you ain’t black.” Come on, man!

This is the stuff that progressives peddle to the young and impressionable.

It is also the kind of thinking that drives conservatives to distraction.

It will assuredly drive millions of Trump voters to the polls. They may not be wearing their red MAGA hats or holding signs, but they will show up to vote. America still has a secret ballot, right?