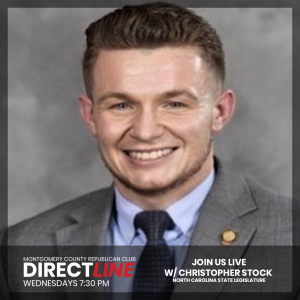 Christopher Stock is currently a staffer in the North Carolina State Legislature. He is a graduate of North Carolina State University where he majored in Political Science and was a Susan Carter and Abraham Holtzman scholar. He also received a minor in Chinese Studies. He is currently a law student at Campbell University School of Law here in Raleigh. Christopher has been working in the General Assembly since 2016, where he worked with former Senator Wesley Meredith of Cumberland County as well. Christopher has had an abundance of experience working in government at both the state and federal level. He has worked in the Washington D.C. Congressional Office of Rep. David Rouzer, NC District and Superior Court, NC Department of Criminal Justice, NC Conference of Clerks for the Superior Court, and the NC Republican Party. Christopher is also a 2020 Spring Fellow of the North Carolina Institute of Political Leadership.

Christopher is originally from Old Tappan, New Jersey, but grew up in Wake Forest, NC, where he has lived for the last fifteen years. He is a graduate of Wakefield High School here in Raleigh.