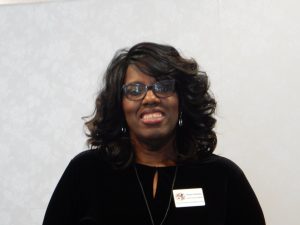 Marie Fischer, originally from Memphis Tennessee, is a resident of Frederick County Maryland, where she was a 2018 primary candidate for the Frederick County Board of Education.  Marie is an IT Specialist in Higher education with over 20 years of experience in IT and has worked as a freelance political consultant on various State of Maryland campaigns. She attended NYU, has a degree in Liberal Arts, and is currently pursuing a second degree in Communications.

Ms. Fischer has recently had a featured clip on Breitbart as one of the speakers at the initial #JEXIT rally in Washington DC on May 7th.  Ms. Fischer is an Orthodox Convert to Judaism and the clip highlighted that she has endured more Anti-Semitism than racism since most do not expect her to be Jewish upon first encounters.

Ms. Fischer is currently serving as the 3rd Vice President for the Maryland Federation of Republican Women (MFRW).  She was recently elected Vice President of the Maryland Republican Women Leaders (an MFRW organization), and is the President of the Republican Club of Frederick County.  She is also a member of Project 21, an initiative of The National Center for Public Policy Research to promote the views of Black Americans whose entrepreneurial spirit, dedication to family and commitment to individual responsibility have not traditionally been echoed by the nation’s civil rights establishment.

This past May, Marie received the Diana Waters Maryland Republican Woman of the Year for 2018 by the Maryland State Republican Party.