The Role: As a Digital Activist, you’ll help promote President Trump’s accomplishments with your digital networks.

The Role: Want to make calls into Florida, Wisconsin, or another Presidential battleground state? With Trump Talk you can call into any state to talk with voters for President Trump. Trump Talk is a phone calling tool that can be used from your home to call other supporters of President Trump from around the country. Contacting voters by phone allows us to persuade potential voters and turnout supporters. This is a beneficial tool because many voters live in rural areas, gated communities, apartment buildings, and other areas that are unreachable through other means of voter contact.  <START TODAY> 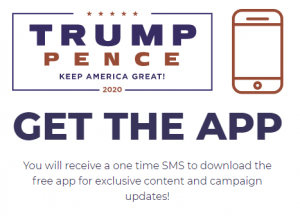 The Role: Looking for ways to join the Army of Trump and support President Trump’s re-election campaign? Become a Trump Victory Finance Committee fundraiser, or “bundler,” and ensure that Team Trump can run the most effective campaign possible. Our Trump Victory Finance Committee is vital to reaching every donor, no matter how large or small. If you want to help, you first have to sign up here

After you are registered, you will receive a unique fundraising ID and customized contribution link, allowing you to access your personalized Trump Victory Finance Committee portal where you can track your progress towards your fundraising goals. Once you are part of the Trump Victory Finance Committee, you’ll be able to involve friends, family, and colleagues in the campaign. You can tap into that community to fundraise for President Trump’s campaign.

As you build your fundraising network, you will earn membership status within the Trump Victory Finance Committee and enjoy unique benefits. No contribution is too small – the average donation to the Trump Campaign is only $38! We all know that the Democrats and the liberal media will pour billions into their efforts to defeat President Trump. Together, we can make sure that President Trump and his campaign have the resources to win again on November 3, 2020. Your hard work can truly make a difference in this campaign.

HOST A MAGA MEET UP

The Role: MAGA Meet-Ups are great ways to gather and organize fellow Trump supporters in your neighborhood. This includes hosting events with family, friends, and neighbors to watch debates, rallies, and campaign events across the country. MAGA Meet-Ups contain a social component, discussion about how to take action in the community to achieve a specific goal, and future involvement. In fact, Trump Team Leaders will often host their own MAGA Meet-Ups as a recruitment tool to identify and engage new volunteers.

Host a MAGA Meet Up