In 2000 when Governor George W. Bush ran for President, in the month of September and October I had 5 signs stolen from my front yard.  That was when it all began for me at least I am certain the left has been ripping off Republican signs since the days of President Nixon.

In recent years this has escalated from just childish pranks of stealing signs to a lot more sinister, down right evil stuff.  I experienced my car being keyed in 2004, in addition to my Bush-Cheney signs getting stolen not once or twice but four times.   My case isn’t as unique as one would think, evidently many Republicans have experienced leftist vandalism.  Many Trump supporters have woken up all over the country with everything from spray painting FACISTS to spray painting swastikas on Trump yard signs.  Many of these crimes are happening in blue areas where blue prosecutors, even with video evidence, declined to prosecute, since most likely they agree with vandals.

Now, if it all just ended with vandalizing and running off with yard signs, this wouldn’t be big news.  However, this has escalated to dangerous levels.  Now they are burning signs, keying cars, throwing bleach and acid on supporters of the President. 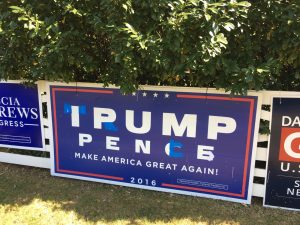 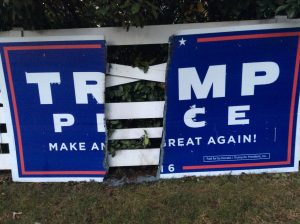 Then there are the reprehensible actions where supporters of the President have been violently attacked.  This past weekend, we saw a Trump supporter have his teeth knocked out at a pro-Trump rally in San Francisco.  On Saturday afternoon, a Republican Central Committee Member from Baltimore County and his father were in Kingsville driving home after building a wooden frame and installing a Republican political sign to put in the bed of his truck. As they turned onto Mt Vista Rd from Cedar Ln, they saw a man on a corner property that had many political signs, mostly for Joe Biden.  The shooter was tending to one of these signs as they drove by and the horn was honked in a friendly manner. The man then picked up a shotgun from the ground next to him and ran towards the fence aiming the gun at the truck. They were in shock that anyone would point a gun at a moving vehicle with two people in it, as they looked directly down the barrel. They never stopped or even slowed down the truck, but after they drove about 100 feet he fired the shotgun in their direction.  Thankfully, he missed the shot.  They drove to safety and immediately called the police. Later in the day, Brandy Lang’s father was taken separately to identify the man, who was then driven away in handcuffs.

On October 10, 2020, at an event put on by pro-Trump supporters in Colorado, an NBC news affiliate employee shot and murdered a Trump supporter. These supporters, like in San Francisco, were confronted by leftist BLM & Antifa members.  Coincidentally, the shooter was a BLM supporter.

The serious problem on the political left is that they have resorted to political intimidations.  I have spoken to countless Trump Supporters in Montgomery County who will not display a Trump yard sign for the fear of physical abuse from Biden-Harris Supporters.  When will Joe Biden and Sen. Kamala Harris condemn BLM and Antifa?  (Joe Biden, “… it’s and Idea…”).